I like themes. I've worked with multiple themes over the years and I always come back to trying to build my own. 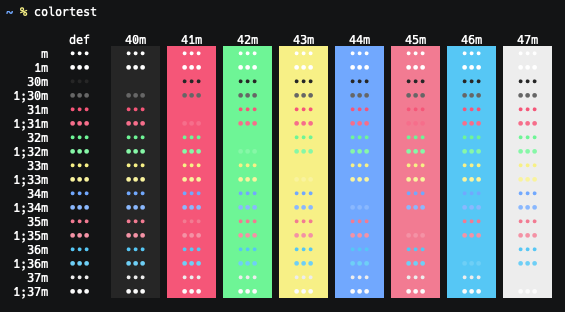 I used the following tools to help build it and preview the colors as I was working on it:

I also created a theme for Vim with Vivify but in the end, I preferred sticking to noctu.vim.

Hack the Vote (not really though)

IMPORTANT INFORMATION: I contacted the people involved with the show and they verified the issue and confirmed that they had other methods set in place to address this issue. The following is their response after describing the issue I had found:

Thank you for the information. It is not our policy to provide details on security practices, but there are multiple layers of post-processing that address the issues you raised. We appreciate your willingness to share your findings and the opportunity to validate that controls were in place.

I asked about posting my findings and I received the following response back:

While we appreciate your reaching out, we are unable to provide consent to the naming of a show or the companies involved. Voting processes are active and reserved for legitimate voters. Thank you for your understanding.

I have removed the references to the company and the show from the post and the code.

I came across this while voting for an unnamed companys recent TV comedy talent show. I am not an active viewer of these type of shows, but given that a comedy group I follow was competing, I wanted to watch their performances to support them.

During the semifinals, they opened up the voting for the audience. The voting process required that I signup with an email and password. One dropdown and two checkboxes later I could finally vote. Their voting system is built in such a way that an individual email account can vote up to 10 times. This is performed with a simple enough slider and once you've set your vote, you submit and you're done.

That's where I thought it ended. I had completed my duties as a fan by casting a vote and there was nothing left to do. That is, nothing left to do but open up the developer console and see how the voting system worked.

Since the network requests weren't telling me much more, I went ahead and opened up the source code. After prettifying the code and finding the spot were the vote was being cast I was surprised to find out that the Authorization token was actually just an encoded version of the exact query parameters. I thought it was weird that they would ask you for a login but not tie that in any way to this voting POST request. I also thought there was no way I could modify the data and get a successful response. I was wrong.

There is no way that vote counted. I created a new account with that fake email I just used and I was very surprised to see that my new account already had 10 votes for the contestant I had voted for. That means that even if an email address is not registered, it could still cast votes and have those counted.

The obvious next step now was to write a script that I could use to send votes from random emails. This would guarantee that the contestant I wanted to would win the competition.

The code is fairly straightforward as all that is really happening is that the data is passed through the HMAC-SHA256 hash function from CryptoJS and the POST request is sent. I also added a helper function to iterate through a list of n emails to send the vote for each email.

After a few back and forth emails with the InfoSec people at the show, they assured me that this is not exploitable as there are multiple layers of post-processing that address the issues. Without access to their database it is difficult to see how they're addressing it. A few things come to mind:

Regardless of how they are getting around this issue to count votes, I do think that the real fix would be to actually issue an authentication token that is used to verify the voting requests in the future. This seems like an oversight from the group that designed the API but I can't think of any good reason why you would pass the email address as part of the vote instead of tying that to an authentication token.

There were two shows that had opened up the voting schedule at the same time and I was able to get success responses while voting for both of them so I assume this issue would be present on all other shows that require audience voting participation.

You can find the source code along with instruction on how to run it here:

I've had the Arduboy since backing it back in May of 2015. I played with it a little bit when I first got it but for the most part it's been sitting in my drawer.

I've also been following Hak5 for a while and one of their projects I've always really liked is the USB Rubber Ducky. I dont own one myself but I have always liked the idea of the automated HID attacks, especially with the DuckyScript language and all the available community payloads.

About a week ago I decided it would be a good idea to take my Arduboy out of storage and try developing something small for it. After I realized it has an ATmega32u4 I thought I could use Duckuino, a DuckyScript to Arduino converter, and have it run on the Arduboy.

Once I got a basic DuckyScript to work, I thought I could add more than one DuckyScript and write a selection menu in order to take advantage of the buttons on the Arduboy.

Lastly, I added a splash screen after the initial boot process that shows a rubber ducky icon. In order to get into the actual selection menu for the DuckyScripts you have to press the Konami Code sequence. After that you should see a menu with all the payloads on the Arduboy.

The first thing you're going to need to get this up and running on your own Arduboy is a copy of the Arduboy Rubber Ducky code and the Arduino IDE.

Its also a good idea to install Arduboy from the Boards Manager in the Arduino IDE. To do this just go to preferences and add the following to "Additional Boards Manager URLs": https://arduboy.github.io/board-support/package_arduboy_index.json

After that you can just go to Tools > Boards > Boards Manager, search for Arduboy and install it.

I also recommend installing the Arduboy2 library as the main branch of the Arduboy library is not currently being maintained.

Once everything is up and running it would be a good idea to try out some examples and even some games from the Arduboy team just to get used to the uploading to board process.

Whenever you're ready to upload the Arduboy Rubber Ducky code to your Arduboy you only need to press the upload button and you're done.

I've included the basic "Hello World" payloads with my code but you can either write your own DuckyScript payloads or get some from the community payloads. You can convert from DuckyScript to Arduino by using the Duckuino converter which I'm hosting myself to have everything in one place. After converting your DuckyScript payload, you can just copy the contents of the setup function and add it the the ducky.h file.

After that just scroll down to the end of the ducky.h file and add the function you just created to the list as well as a label for the menu.

I noticed in my testing that the payloads run a little slower coming from the Arduboy. You may find that you have to increase the delays in the scripts so that the commands run at the appropriate time.

Depending on which payloads I'm using I also sometimes run into size issues so this is something to keep in mind as you choose your payloads.

I'm going to try to get my hands on an actual USB Rubber Ducky at some point so that I can compare execution times. With that comparison I should be able to figure out what sort of delays will make more sense for the Arduboy and I can modify Duckuino to convert specifically for it.

Feel free to contact me with any questions you may have.